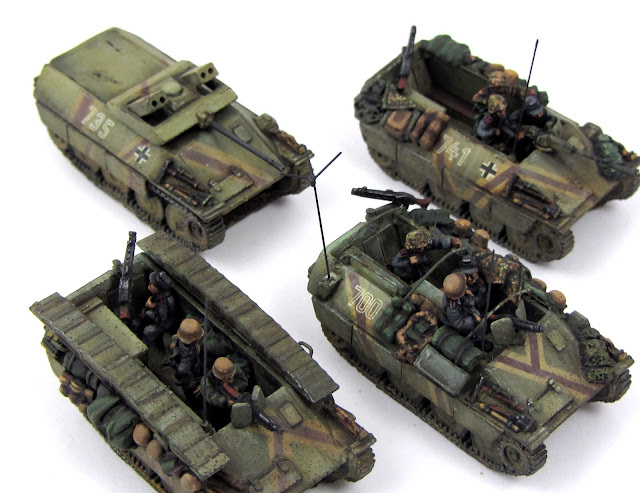 Interestingly little bunch.... heavily modified Forged in Battle "Katchen" APC's.  These sport a "46" camo scheme used on some earlier work, I'm getting quite fond of the late war green base coat, nice change from dunkelgelb. 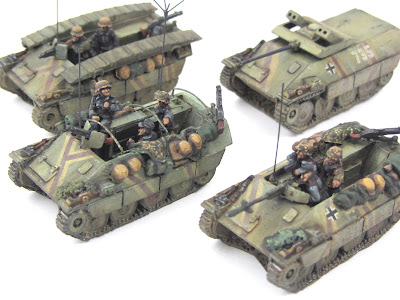 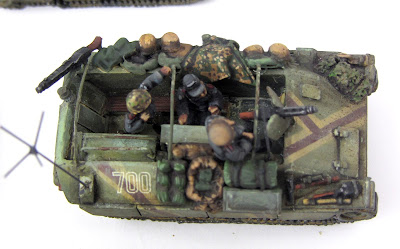 I've mod'd this one into a command vehicle, extra radio sets, aerials, stowage and tarps/zeltbahn ( and yes I know the zelt scheme isn't authentic, it is '46 license!) 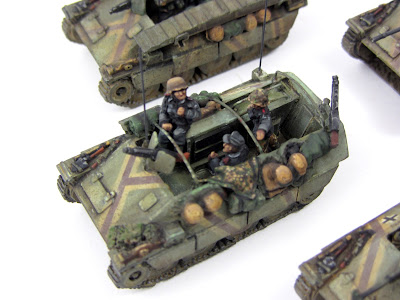 Mixture of figures used, mainly Battlefront but also some Peter Pig. As you can seen the belt sander has been used to remove those awful FiB bases, 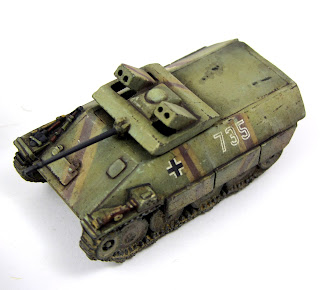 I'm not sure the origins of this turret, it came additional with some other vehicles, so I added it to the set, I'm sure its of sc-fi origins but actually looks quite in place. 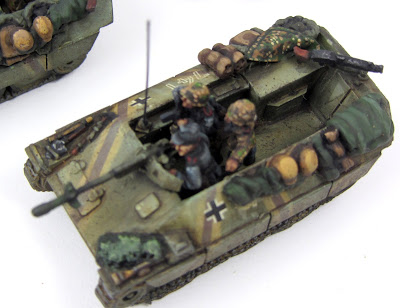 I made up a "objective" base, in all honesty in response to an oversight with the belt sander! So now its bogged down APC with the crew frantically trying to extract it, hopefully I've managed the figure flow so it looks as if they are responding to each other, always key to a successful vignette. 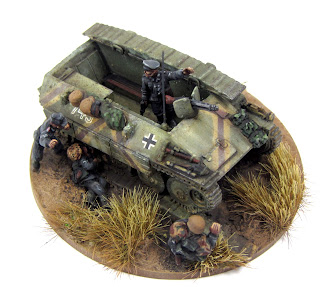 I have a clockgoblin german walker coming through, almost done but just not enough to catch this photo call, and a larger commission of some more Heer46 beauties with some interesting camo, which I think you'll like! watch this space.

As always more picture up on my flickr:
https://www.flickr.com/photos/troop-of-shewe/albums/

and again, need the shelf space so POA or offers to the usual address.

quite inspiring, I like these models a lot and what you have done with them. Any particular game in mind or just for painting?

May I ask, which colours you used?

BTW. the turret is from an Ferret armed with Swingfire missiles. Probably by QRF http://totalsystemscenic.com/product/pbat03-fv712-ferret-mk-5-swingfire/

The turret is indeed from QRF,as I converted it like this, with a 1/72 25mm brass barrel, then sold the lot...can't remember anymore if I sold it to you. Nice to see my old conversion again, and so well painted too :) Well chuffed :)

Ah! The missing piece, indeed it was within a batch of odds and sods! I'm really pleased with the results, not at home so can't trace the colours today! There was a large double barrelled a Sc fi tank in the batch do you remember the manufacturer? It's about to be 1946'd as well

I THINK you mean the Khurasan big MBT that I converted with two 1/72 scale T55 barrels and larger hatches.

That description seems to fit! no wonder I couldn't find it online! Its either going to have some battleship "dazzle" inspired camo, or Ambush, what this space

Did you ever do something with the 2 barreld tank? If not, would you be willing to sell it back to me?