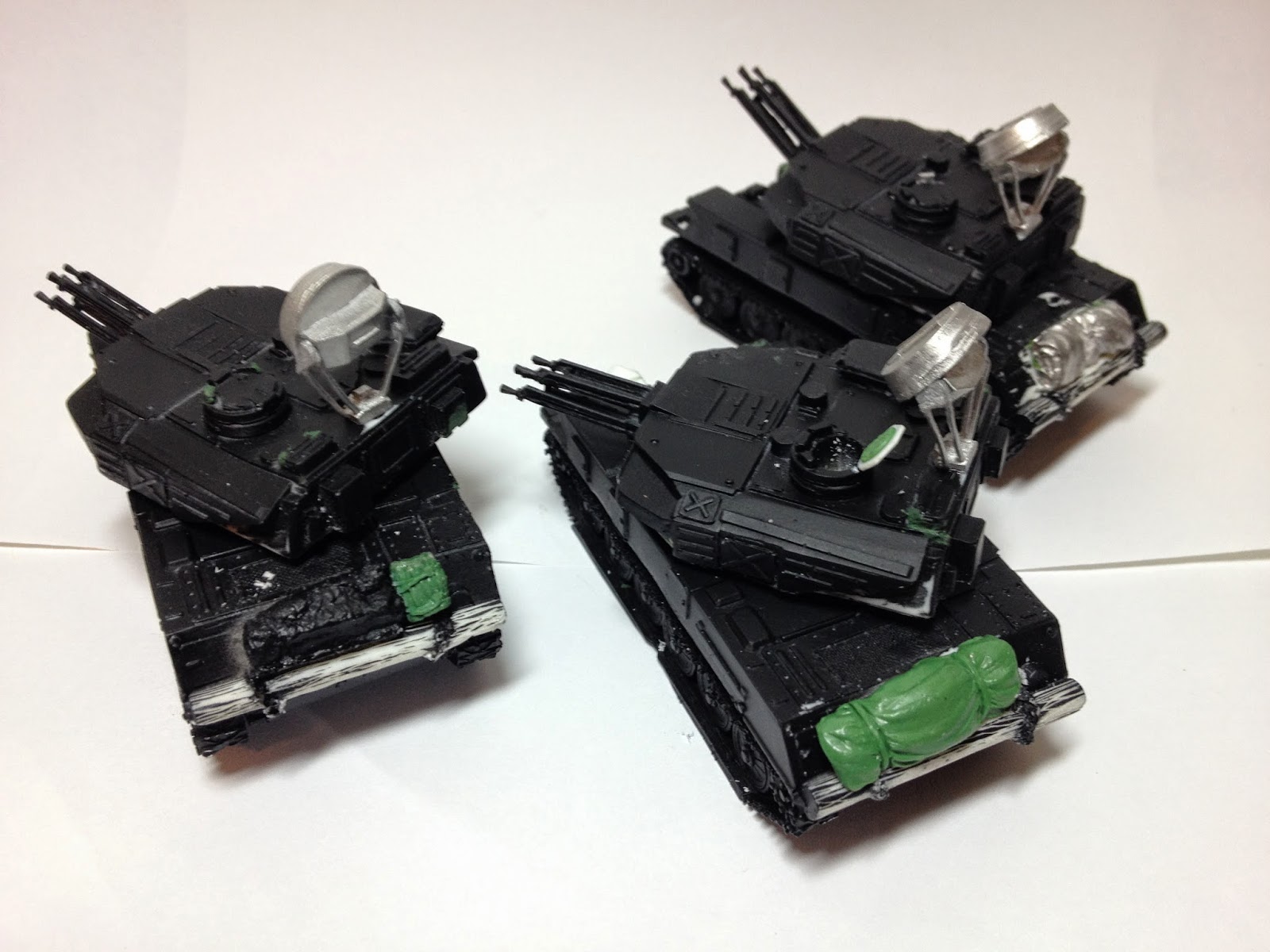 Again, had these floating around for a while, these are S and S Models ZSU 23-4 Shilkas. Great looking vehicle, and for their age a fair rendition ( I believe Shaun may revisit these moulds in the near future).

These are my guinea pigs really; I'm using these as my "mood" boards for my 15mm AIW, i.e I'm using them to practice some paint concepts. Currently, I think one will end up in Egyptian colours and I suspect the other two will be Syrian, one with a red camo over sand and the other the more familiar grey/green/sand "blotch" scheme. 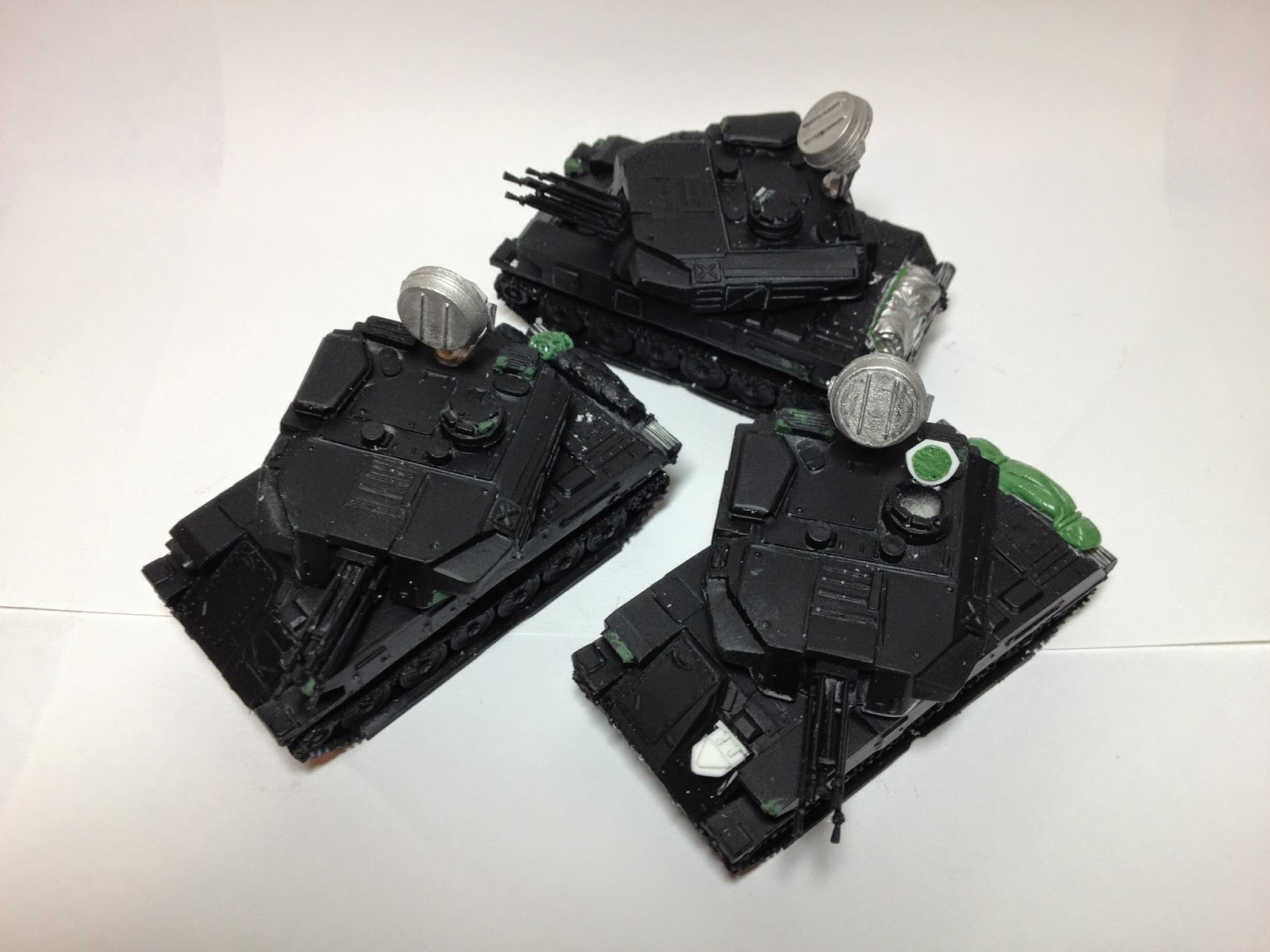 As always, I have to play a bit, so have opened up a TC and Drivers hatch and modified the cast on stowage at the rear ( pet hate!!!!) fairly minimal really. 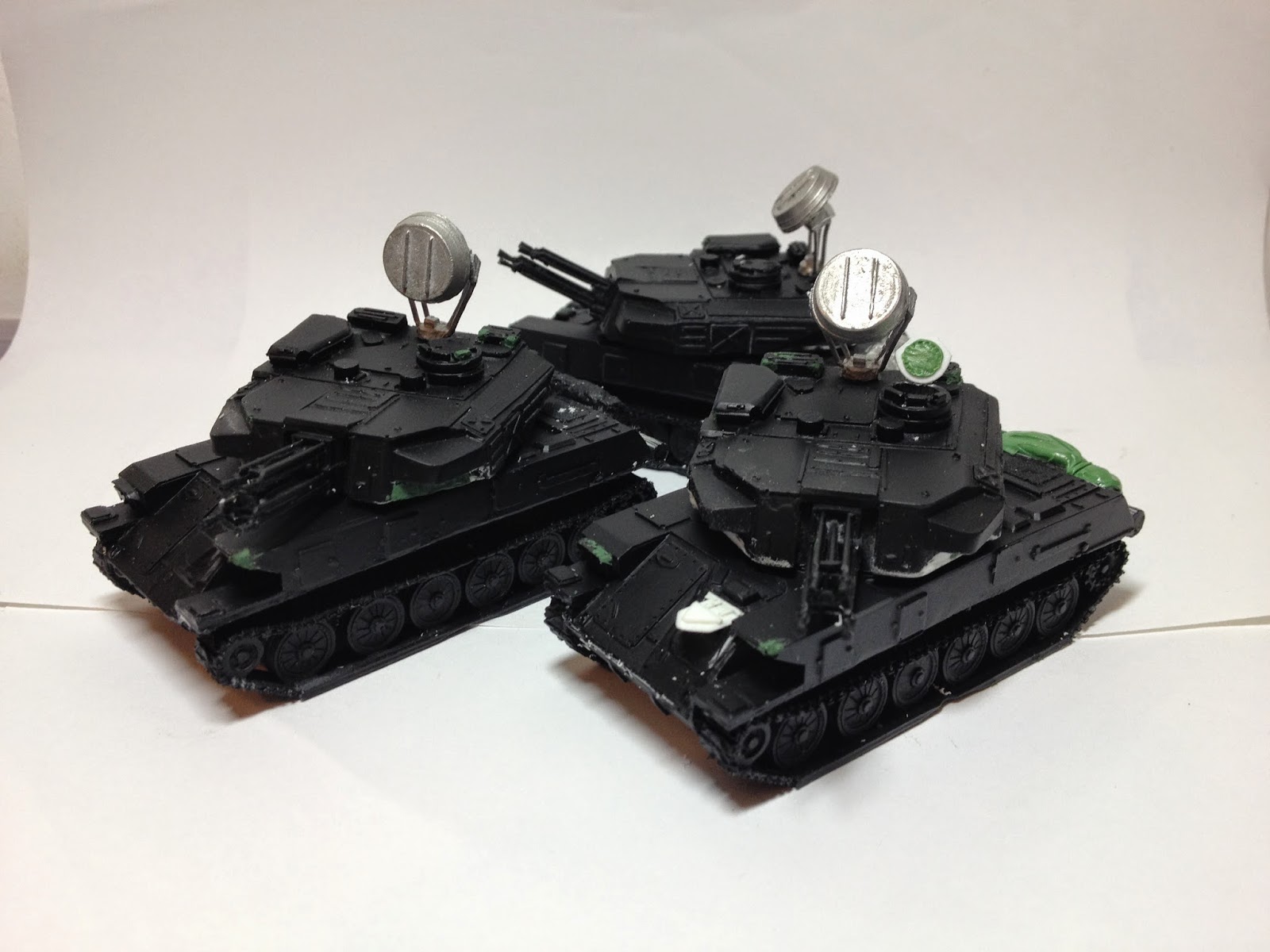 Ok, so whats with the funny colours? ( you may ask!) Well, as with all resin, it needs to be primed properly! As these are a "paint-along" they effectively the ginger-step-children of my painting desk and rarely get any undivided attention so they are subject to the whims more loftier "commission" pieces. Basically, I had a commission batch off for priming so these slipped in before full assembly. What you can see is the result of a plastic primer, black undercoat, white metal kit parts, green filler and green stuff! They will need another primer touch up and a final enamel coat for completeness but they will be fine in the end.

(Words of Warning! I let my guard down recently and didn't plastic one of my paintalongs...... I thought it would be ok.....oh no....flippin nightmare, many hours wasted and all my own fault!)

And who's this little fellow? (you may ask!)... this will be the recipient of all the hard colour work, a 15mm QRF Shilka. I have done quite a bit of work on this and its brethren, opening up solid white metal is not for the faint hearted! but a unit of three of these will look awesome! 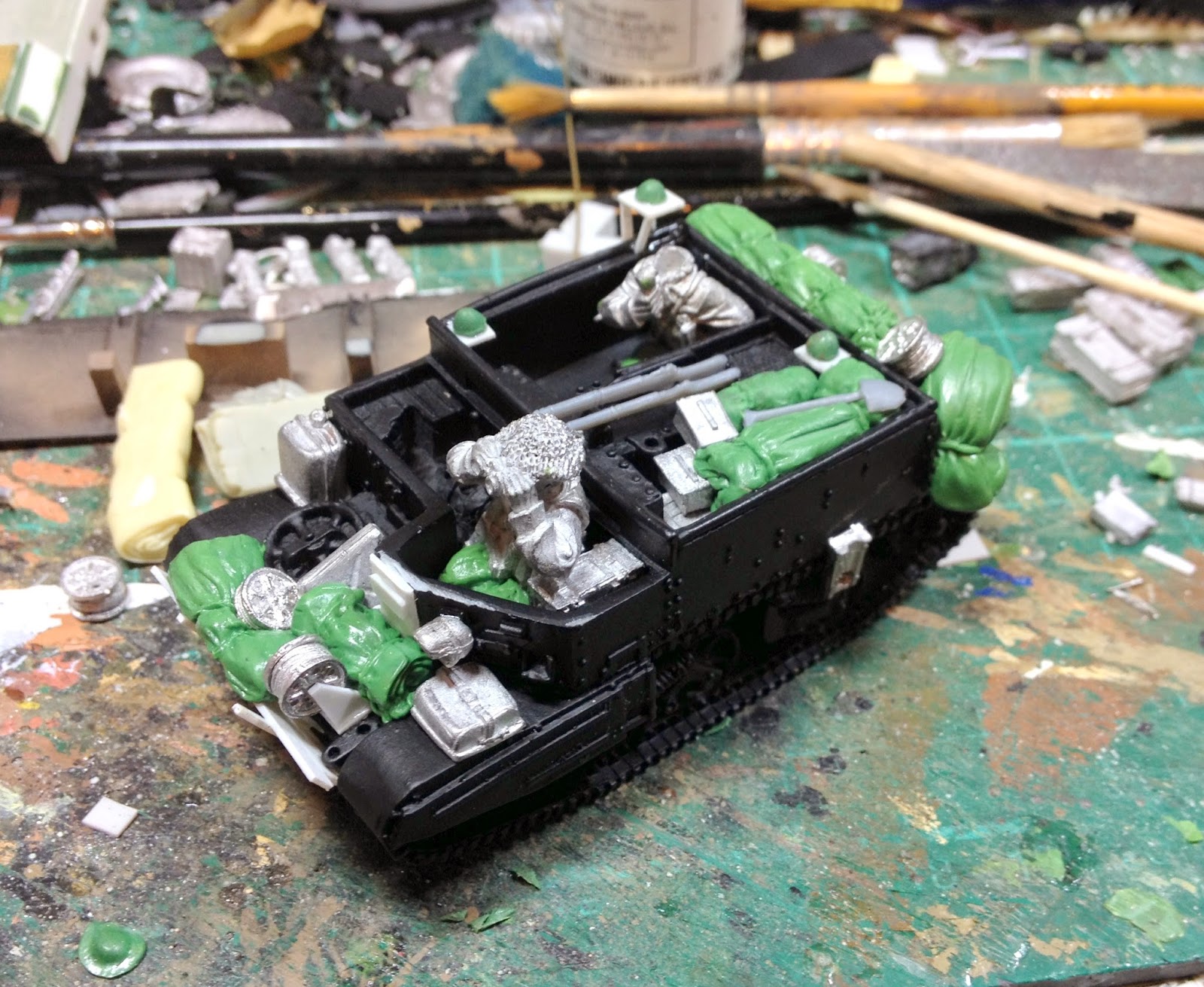 I have just finished a load of 1/56th vehicles, mainly Warlord Display stuff ( best to check out flickr, not had time to flounce them over forums) with a few more in the later stages, which I means I pick up the next batches coming through. In the main I work with one batch at the finishing stage, one batch at the airbrush stage and a few batches in various states of build.

Of the build, I've had some Warlord Bren carriers floating around for a while, so in an effort get them moving I did some work on the AOP version within the set. Some quick and dirty pics attached.  The carriers are all heavily stowed and this one used the last of my of "green stuff" so will put another order in tonight ( have you seen its price these days!!!!)

Anyways, its almost done, am waiting on a ladder and fixings, will add the radio and wiring and of course a wing mirror, oh and some heads for the crew! ( note: crew is the warlord op team, unceremoniously "chopped" and with green stuff legs substituted) 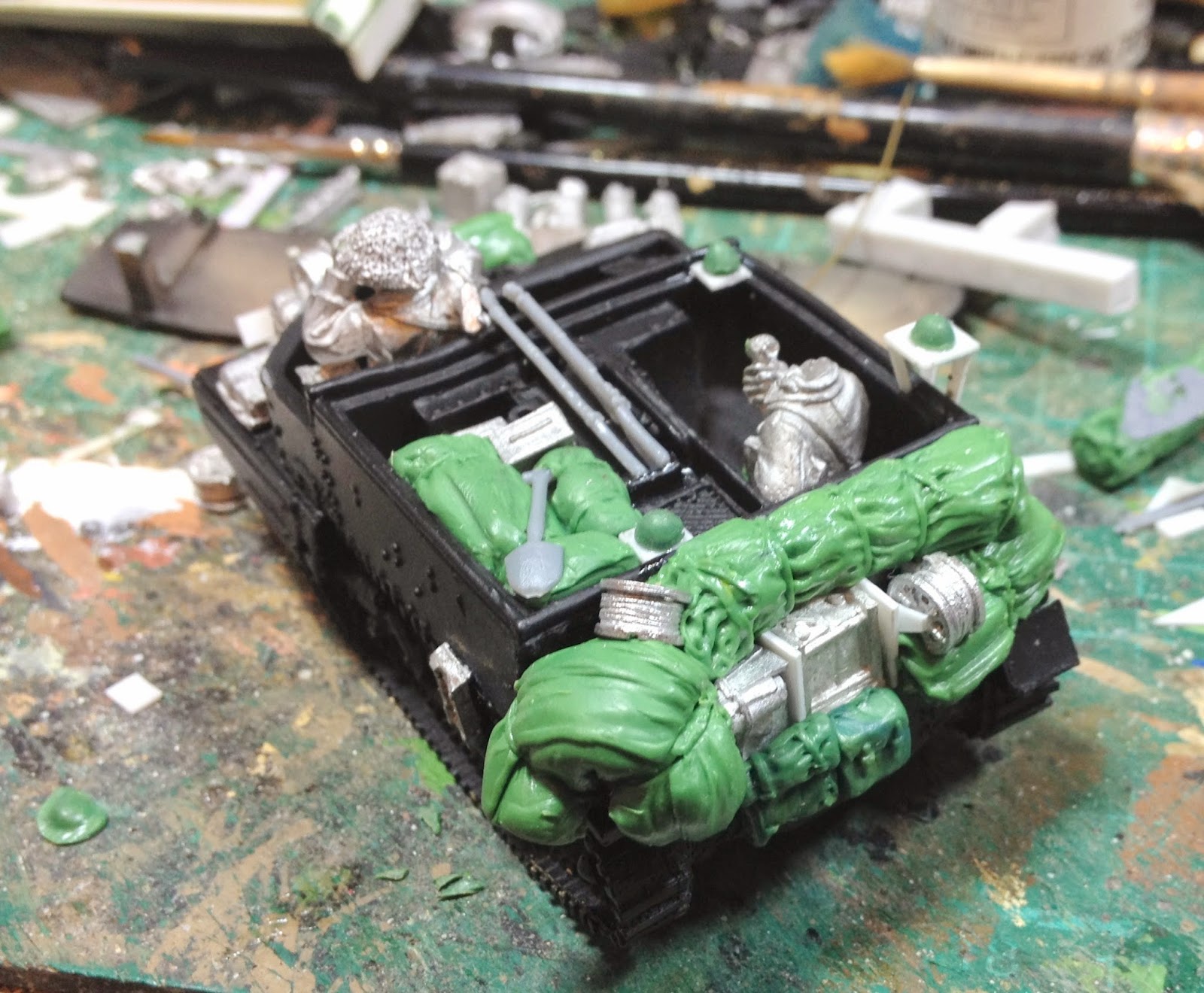 I had planned to do a carrier with the wading plates added, but after seeing Warlords new plastic sprues I think I'll hang on....which reminds me I just have the turret bin to finish on the M4A2 and its off to Warlord for consideration....
n
Posted by Troop of Shewe at 21:05 2 comments:

Email ThisBlogThis!Share to TwitterShare to FacebookShare to Pinterest
Labels: "1/56", AOP, Bren, Tinkering with 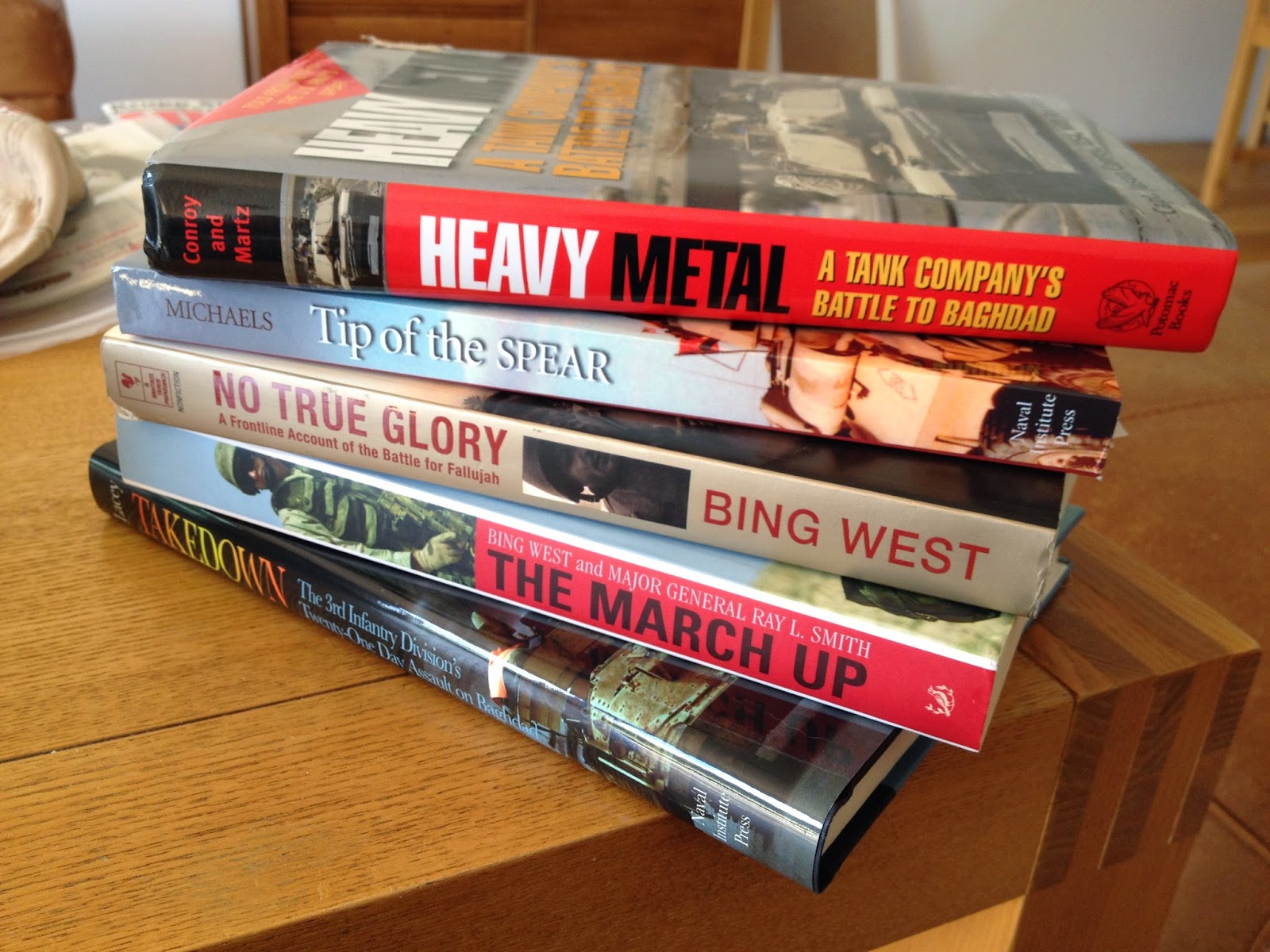 As a lot of you would know, I have had a very successful run of demonstration games, winning most of the top awards but have stepped back for the last couple of years, to concentrate on the day job, family and commissions. I really enjoyed helping out last year with Neil Tew's Salute Winner ( I provided most of his Armour) and too be honest missed the "buzz" of creating something special myself.

Anyway, after attending Salute this year, and while being impressed by the the overall increase in quality, didn't really find much "wow" factor I'm afraid ( caveat: for the areas I'm interested in!). I was inspired by the work put in by the Jersey Privateers in their 15mm game. The terrain was simply stunning, not entirely sure if their efforts were rewarded, 15 & 20mm not historically finishing high the the Salute judging tables ( and notice not an MDF building in site!). 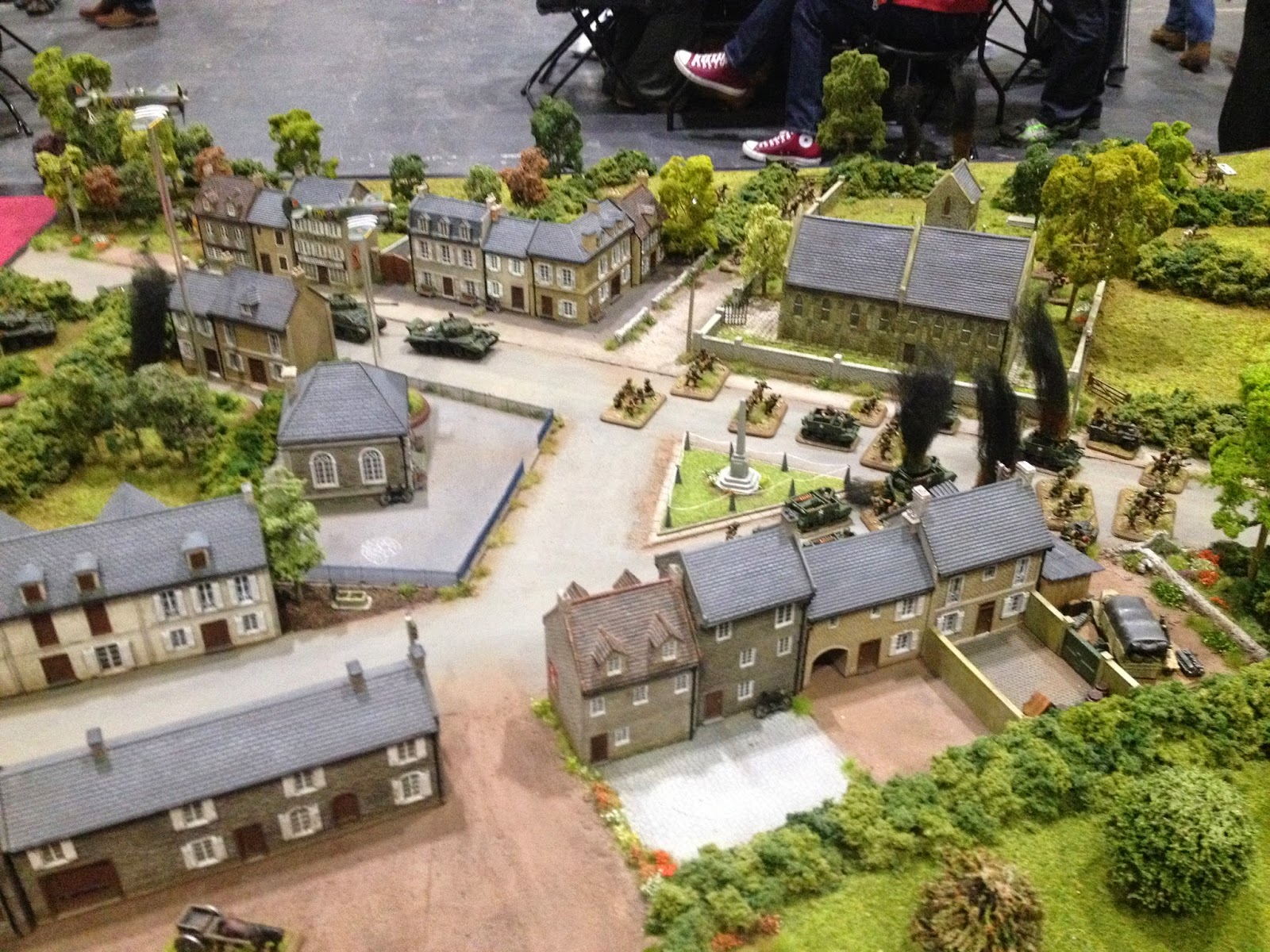 So where am I going......whilst order books are still healthy, and my focus is always on showcase quality commissions, I feel I'm in a position to consider reopening the demo "box". After having a chat with the stalwarts at the "Escape Committee" club who help with the demos on the day, at this stage it looks like a real possibility.

In tandem my interests have drifted away from WW2 and into modern, both AIW (Yom Kippur), and after being absorbed by the book "Thunder Run", OIF .  I have found the AIW has morphed into 15mm for gaming and 20mm for detail/ enjoyment ( if that makes sense!),  so that leaves me with the Americans in Iraq....

So what am I thinking..... I have an interest in both the 3rd ID and the Marine actions in OIF (who doesn't love those Amtraks!). As a stickler for detail I need to separate these two subjects into discrete games, initial focus will be the I-64 and Thunder Run, and if successful then the Marines. As as most of you will know, Thunder Run means Abrams and Baghdad Motorway, hmmmm not the most scintillating terrain I hear you say.....and in 20mm......

As with most of us "creative" chaps and chappesses we always enjoy a challenge, have I meet my match? well maybe.....I have some preliminary ideas which I will keep under wraps for now, but will start posting here as soon as things get going.

As you can see I have some reading to do in order to formulate specific scenarios, and in concert am collecting the forces needed, so the initial posts will be ideas and plans....

No Change!!! As may be apparent I have reduced my web presence significantly over the last year, I can't cater for generic multi media requests for tutorials, 1-2-3 paint recipes and youtube videos as it takes time away for doing what I enjoy - creating mini masterpieces !! (and to be honest there are more gifted chaps out there than me to support these areas).  That being said, I guess I'm more "old school" and am more than happy to exchange individual emails (and do so frequently), sprinkle some eye candy over the odd forum and hopefully update this blog a bit more regularily.

I have some wonderful "regulars" without whose patronage I wouldn't be able to fund these artistic digressions, so they/you remain my priority, occasionally I take in new stuff that peaks my interest ( you know who you are!), and occasionally I have commissions that slip so I will still attempt to juggle all these!

My one constant is that everything gets photographed and the gallery resides in flickr, so that's always your best place for getting the latest views of my work.


Anyway enough ramblings for now, off to the shed to fire up the airbrush, and to buck the current "arty" trend I think its a modulation free zone today!
Posted by Troop of Shewe at 10:51 2 comments: