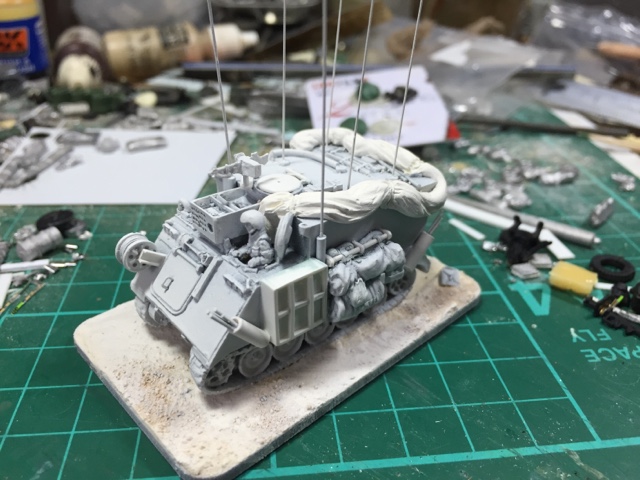 As with just about everything I'm building for the 1973 war, I've had to do some detailing to make it suitable for the IDF. Information on '73 M577 is scarce so this mod is probably a mixture of fittings from '73 examples to '83 and possibly later. The M577 will be my HQ stand primarily for my M107s but can stand in for the M109 battery as well ( both will use the M548 ammunition vehicles) I think the M50 battery will have a M3 command track to go with its lorry supply train.
So...what I could pick up in the forums is the lack of antenna guards on the roof and removal of the rear stowed tent assemblage. Obviously the vehicle sides have the usual paraphernalia but I really like a reference with tubes holding artillery ranging poles so I took so artistic license.
I started with the Battlefront/ flames of War Vietnam version. 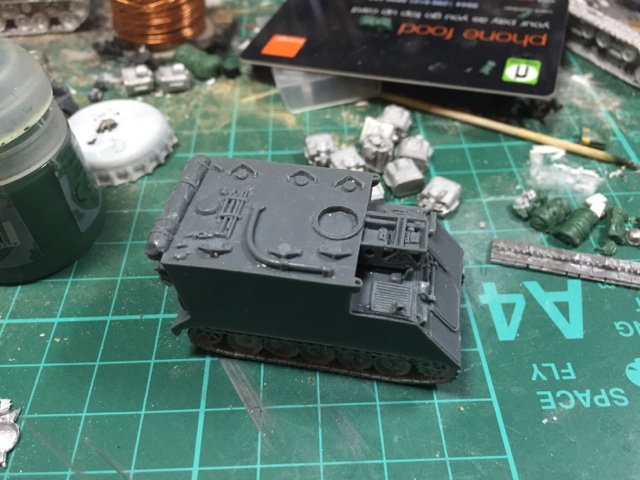 As it comes before modifying 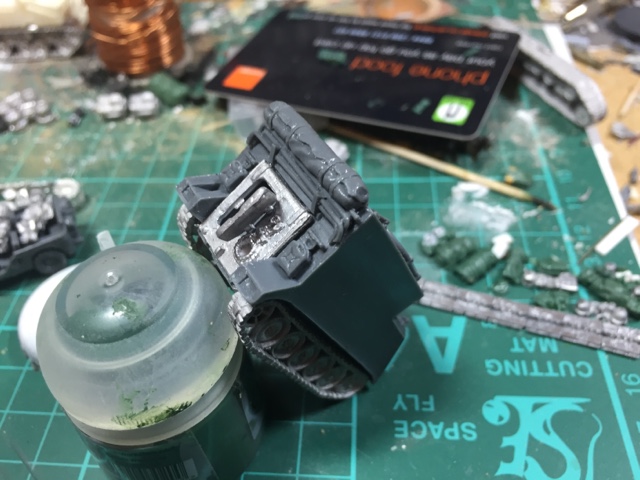 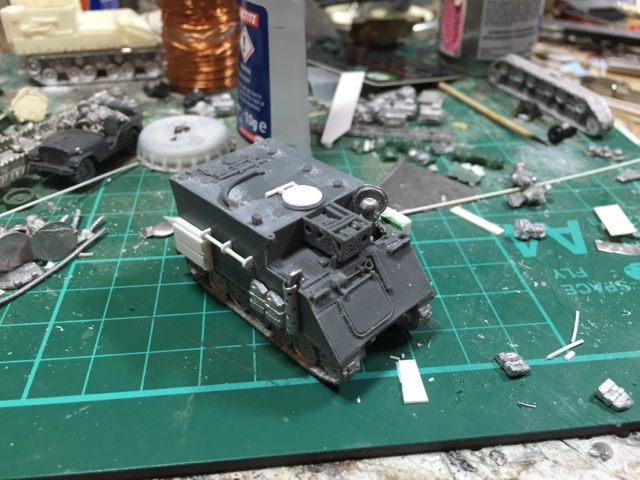 Start of adding mods, revised roof hatch and side stowage 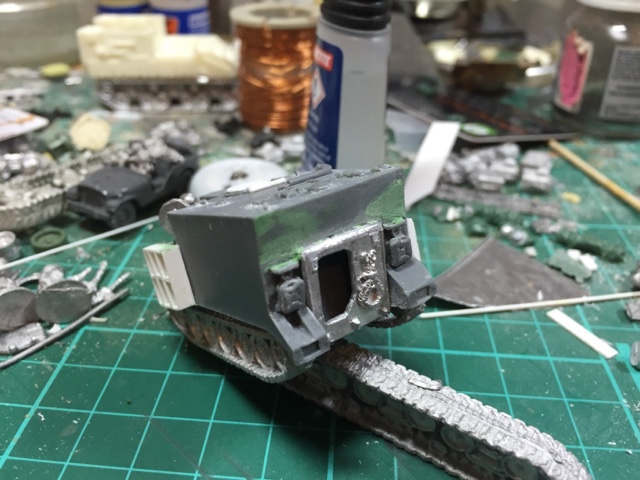 The tent coming off was a right pain, should have used the dremel 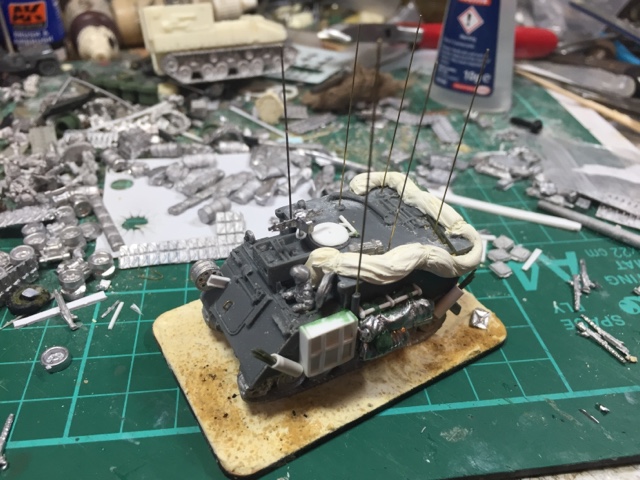 Most of detail added and installed in base. Have decided all the AIW vehicles will be based, bases bought from warbases, excellent service! 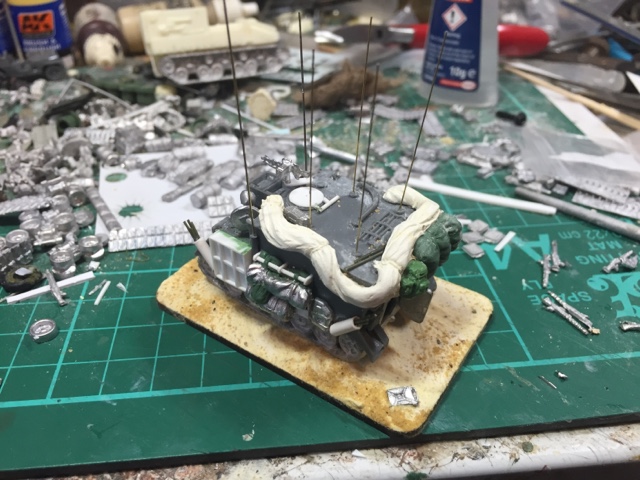 I've added the ubiquitous rolled cover sheet, used to disguise and cover the vehicles when stationary.
The initial primer coat shows up any surface problems (below) , so this is now ready for its foundation colours. 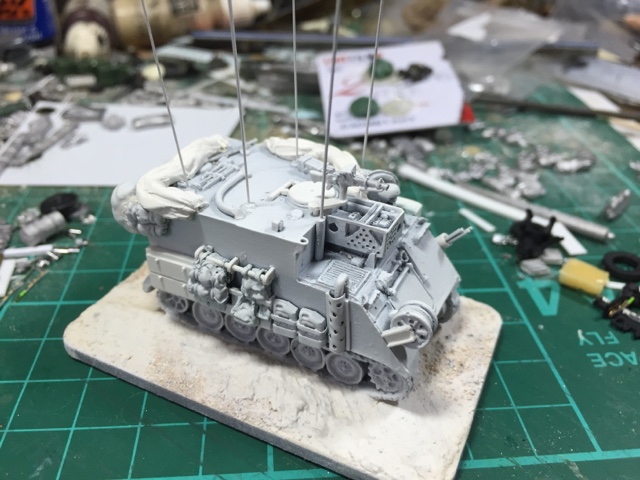 I think it needs a commander figure either talking to driver, or possibly with binos on the roof ( although I suppose the hatch his shut!) or maybe going in the rear. I have some spare dogs from Peter pig so this may be the opportunity to use one!
Progress is slowly coming on, notable updates
- Urdan copulas moulded by S and S models and work really well on the BF M48
- Khurasan M60s assembled and in the process of up detailing
- M50 left hand side track section complete so that will be off to Shaun soon. Looks like my first complete vehicle  will be on S&S model product list pretty soon!
- IDF artillery loads competed, and moulded, both tubes and shells, should have loads of Cold War applications, again they will be in the S&S catalogue.
Posted by Troop of Shewe at 16:46

That's really some impressive conversions! I wish I had such patience...

Thanks guys, I'm finding the work quite challenging so it's given me a bit of a kick start for the hobby again, M50 spg is almost done now!

Wow :)
This is an incredible collection of ideas!
Waiting for more helpful pieces.
You would amazing to read a similar one here-
diysbest