Something have wanted to try for a while. Most of you will have seen the gun crew bases I do with removable crew bases, so decided to push the envelope and try with an urban 88mm.  I made the usual base up from war bases , applied the ployfilla substrate and then attempted magic sculpt rolled over the top! Big disaster, putty wouldn’t adhere doh!
The cobbles are defined using the putty rollers from green stuff world, bought two a while ago 15mm and 28mm, first chance to use in anger.

So rescued the epoxy and rerolled on the desk, with loads of talc! 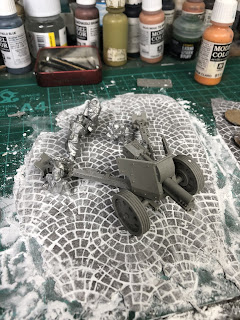 Pre placing of crew just for fun! The Barn door is the Heer 46 one, unfortunately the barrel is so over scale I will have to replace, be fine if I was using Orcs or something! 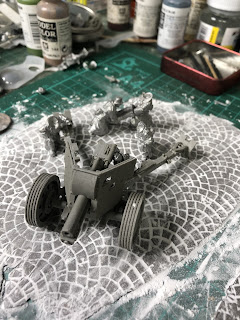 Next step to transfer and  glue to the base when dry. Then it’s a case of a bit of fettling  to recover the recessed and make the positive base blanks for the crew. 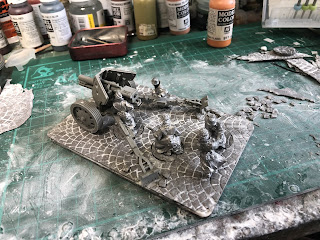 Crew in place, not looking too bad 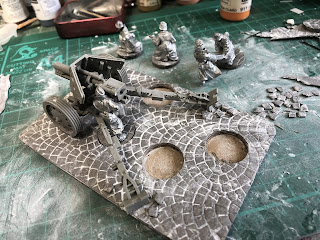 Ta da! Crew pinned on 20mm rounds for casualty removal, now for the spares box for the usual gun paraphernalia !
This needs to sit for a bit, have some T34’s and a Churchill SBG calling, although it’s now paved the way for my tram barricade....

That looks awesome and very realistic great job Neil .is it for me lol

Not that I am aware of! Someone else has first refusal. I have a six pounder and loyd that you may be interested in but not on cobbles and behind the AVRE SBG. Have a lovely bergepanther shipping out this weekend pics will follow ....

I am assuming “unknown” is you Neil T?

Do you want it sent up separately or with the next items out?

With the next items Neil is fine matey