I’ve had a bit of a hiatus with this blog, but am now getting back on track.
After reading the new Panzers in Berlin book, I was inspired to create a Panther F.

Originally with only speculation on their operational use the book confirms with several photographs.
On to the build.... I had a old JTFM Panther in the spares box which was ideal, sort of. The JTFM Panther seems to be modelled on the Panther II prototype hull, which makes it awkward to use normally. The difference (in 1/56) between the II and F hulls is minor, primarily some redefining of hull plates ( hence the green stuff lines) so it’s a good donor.

The supplied steel wheel set was replaced with a spare track set from a Warlord Panther G which worked fine with some filler pieces. Other alterations were substitutions with rubicon panther spares to upgrade the resin versions 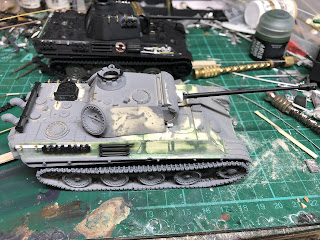 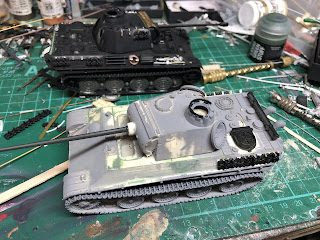 Still some work to do on this one, but it needs to sit a while whilst I get some other Panthers moving.
Posted by Troop of Shewe at 08:24

Glad to see you're back. And with an interesting build to boot